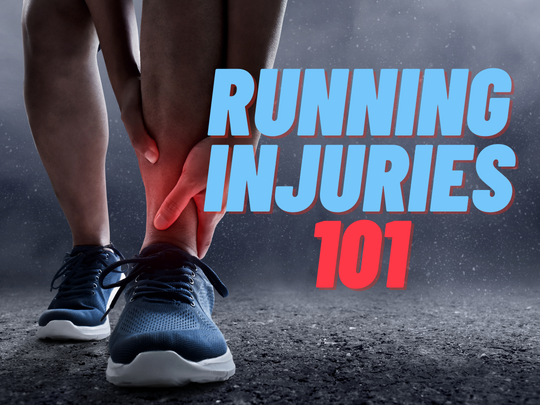 Let’s talk about running-related injuries and the questions “What do we do?”; “What do we look for?”; “What’s the direction that we go when we see a running related injury?”

We then have to determine: Which route are we going to go? Is it a soft tissue injury or is it a bone injury? We treat these, for the most part, completely different (there’s a lot of similarities as we get down the road, but we would treat these differently.) In general bone injuries progressively get worse as you add increased load, as you run more. With soft tissue injuries, a lot of times people describe it as kind of warming up – “It’s bad at the beginning when I first start running for about a mile/half mile or two miles or so, and then it gets better, and then maybe towards the end, it’s starts to bother me again” – that’s more of a soft tissue injury, in general. Bone injuries often are just going to crescendo, and are going to get worse and worse as the run goes on.

We also think about where and how it hurts. If it’s more of a pinpoint spot (you can isolate this one spot) and it’s a sharp, stabbing pain, that’s often more of a bone injury. If it’s kind of a generalized ache, maybe some throbbing discomfort, that’s a lot of times more of a soft tissue injury.

Again, we look at some things that are just general rules – they don’t tell us yes or no, either way – and then we have other things that we also want to look at. Generally, those are the kind of routes that we’re gonna look at: bone injuries get worse as the run goes on, they’re isolated sharp, stabbing, pain; soft tissue injuries, tend to have that warming-up sensation, and they’re more generalized, achy sensations.

If it is a bone injury, then we need to take some time off and we need to take load off of that region to allow it to recover. That doesn’t mean that we’re just at complete rest, sitting on the couch watching Netflix, that means that we’re taking off the stimulus from a de-loading standpoint, from what’s causing the injury: running. There’s other things that we can do and other things that we can progress from therapy standpoints.

If it’s a soft tissue injury we’ve got to find the next road. This is a longer progression of activities. The main thing we want to do with a soft tissue injury is get you back to running. There’s a pain scale, an acceptable level of pain, depending on what we’re in. If you have a bone injury, the acceptable level of pain is a 0/10. If it’s above zero, that’s not acceptable, we need to back off until you feel a 0/10. That means that we’re allowing for recovery to occur. With a soft tissue injury, we are actually accepting up to a 3-5/10 pain rating. 3/10 is totally fine. If you’re up to a 5/10 then we’ve got to keep an eye on things and potentially manage or shift around what we’re doing, but having some level of pain with the soft tissue injury is okay. It doesn’t mean that things are getting worse, it doesn’t mean that you’re causing more harm, it means that we’re loading the tissue enough to create change. As long as we can get it to that level, and then let it back off. That’s another differentiation that people are generally afraid of: 0/10 is not always the answer; for bone injuries, 0/10 is what we need; for soft tissue injuries, we’re okay, having a little bit of pain, if it’s at about 3/10 or so.

We’ll try to get as heavy of load as possible, do as much range of motion in a controlled fashion. So we want heavy load in a controlled and slow manner to start out with. We want that tissue to go through a lot of load over a longer duration of time to help desensitize the tissue and to help build up capacity and build up tolerance within that tissue.

So if we go back: we have a running related injury; we have to find the fork in the road: bone injury = 0/10 pain is acceptable – we don’t want any pain. Those types of injuries generally get worse as the activity goes on and have that pinpoint sharp stabbing pain; On the other side, we’ve got a soft tissue injury = we’re accepting upwards of 3/10 pain which is okay, you are not making things worse if we’re in that category. We have to get you running and get you back to the activity that’s problematic by modifying that running somehow, whether it’s form or parameters and then get you loading the tissue in a slow and heavy fashion

Here at Peak Endurance Performance & Physical Therapy we help active adults in the Madison Area get back to the activities they love without pain or limitations. We see people of all ages, ability levels, and individuals trying to get back to a multitude of movements including: getting back into running, women postpartum, CrossFit athletes, climbers, gymnasts, wrestlers, overhead athletes, and your recreational weekend warrior. If you’re looking to get back to the activities that give you meaning, relieve stress, and make you feel like you again, feel free to reach out below and we’ll see if we’re the right fit for you.

All information on this website is intended for instruction and informational purposes only. The authors are not responsible for any harm or injury that may result. Significant injury risk is possible if you do not follow due diligence and seek suitable professional advice about your injury. No guarantees of specific results are expressly made or implied on this website.