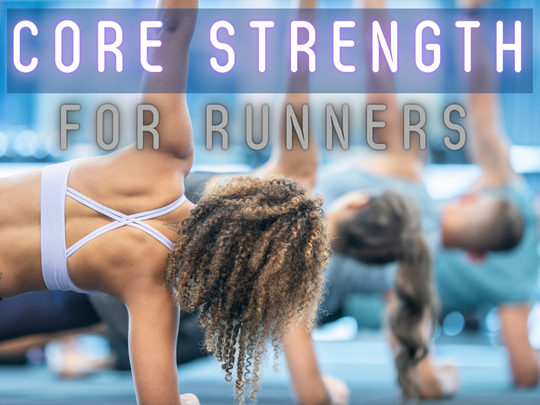 I’m going to take you through a really quick core strength sequence that I like to use with runners. You could tack this on to the end of your run, or maybe the beginning as a warm up. As runners, we obviously want to have a strong core, but we also want to think of working on things that can get us on one leg. Running is a single-leg activity, so I think taking some of your basic core exercises that you may have done before, and doing them on one leg is a good way you can make them a little more running specific.

I’m going to take you through a sequence of exercises. We’re going to do them standing, and then do a few exercises down on the mat. You could do one set of everything, or if you’re looking for a little bit more, you could turn this into a little longer workout by doing two to three sets of everything.

Starting with the standing exercises:

You can go through all of those standing exercises once and then you can come down onto the mat.

Just a few quick exercises down on the mat:

So there’s a really quick, core strength sequence, but again you’re making it a little more running specific by doing something standing on one leg and then including a little more glute meade strengthening with that side plank leg lift and that high plank with knee to elbow.

Here at Peak Endurance Performance & Physical Therapy we help active adults in the Madison Area get back to the activities they love without pain or limitations. We see people of all ages, ability levels, and individuals trying to get back to a multitude of movements including: getting back into running, women postpartum, CrossFit athletes, climbers, gymnasts, wrestlers, overhead athletes, and your recreational weekend warrior. If you’re looking to get back to the activities that give you meaning, relieve stress, and make you feel like you again, feel free to reach out below and we’ll see if we’re the right fit for you.

All information on this website is intended for instruction and informational purposes only. The authors are not responsible for any harm or injury that may result. Significant injury risk is possible if you do not follow due diligence and seek suitable professional advice about your injury. No guarantees of specific results are expressly made or implied on this website.